see into your own future 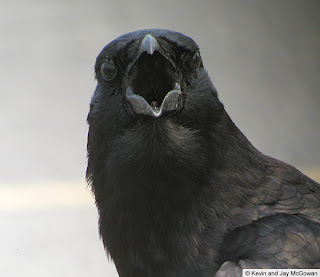 eyes in there somewhere alive, cruel

for prey to draw near

Crows don't do prey. They are carrion birds, and they see death shining. When they crark you only hear half of the sound. Half of it is only audible in a different world.

It's a world of exchange on this here blog.

I came across this today and thought of you......

The fuel-injected articulacy of everything we write in infactuaction or anger. Latin for the fury, loves Anglo-Saxon tropes.....No wonder writers wreck their lives trying to maintain these two states.

I wonder if this true of all writers or is that a broad brush statement?

What on earth is 'infactuaction'? It's the sort of multi-word the Germans invent for special occasions, isn't it?

Anyway, I thought war and conflict was the Anglo Saxon trope...

Anyway it is ok, we have been looking at a lot of blogs and forums for a project at school. This statement was in a poetry book so we wrote to everyone asking the question, thank anyway.

well it's no doubt true that some language origins seem to lend themselves more to certain specifics, but I have no idea how many poets actually analyse language that way. It seems a little clinical to me, and despite all the clinical work that poets really ought to put in regarding language before actually writing any (and many of them don't anyway), I'm not sure that many of them would think oh now I need to concern myself with love so must switch from North European to Mediterranean... I really suspect if that were the case then some sort of sophisticated language-bots would be writing it for us, and the irrational nonsense of love and pain would no longer have any real place in poetry. Ultimately, I think, poetry is irrational, human mathematics, with all the inconsistencies that that implies. It's like sex, and you just don't get your calculator out to work out how effective it is. But you're talking about states, and in my limited experience I'd have to say that everyone alive is balancing those linguistic states anyway, and many of them struggling with them. Maybe the only difference is that poets are trying to document them and send reports back.