He had the finest ear, perhaps, of any English poet; he was also undoubtedly the stupidest; there was little about melancholia he didn’t know; there was little else that he did — Auden on Tennyson
Posted by Steve at 1:16 am No comments:

she could also see that it wasn't working

oh she loved him and everything

in the night she cuddled him

in his dark uncomplicated wetness

sepia devotions of the dead 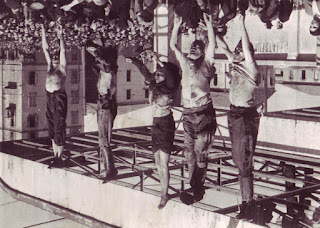 ...nearer to the sun and air—wind in the willows
i am the son and the heir—the smiths
yeah, man, the elements—anon

even to use that word is abuse
yes, the s-word (or its many toxic siblings
for it cannot be—is itself
an act of self-negative life-negative
sexual colonization
—Alice Aforethought

(Librivox audiobooks:
the American woman reading Herodotus
pronounces Herakles to rhyme
with some plural of hysterical)

" 'We think,' they say, " 'that it is unjust
to carry women off, but to be anxious
to avenge rape is foolish—wise men
take no notice of such things' "—
attrib' 'The Persians'—Herodotus.

the bullet and the rainbow

for the time has come the walrus said
to live of many things—Madeleine Shine. 2008.
*lustration (come back to this point?)*

for we are holding a drug bee a writing bee
a sex bee a cookery bee a future bee a bee to be
—unknown; possibly from ben, a prayer or prayer meeting—
it is only formally and foolishly fortunate that we are not apiarists

the kessel envisaged as a giant hedgehog


when you were gestating birthing fixing

what dreams were begat of the world?


[that Ulster-rendered 'now' is a clusterfuck

of /ah/aw/ee/ phonemes (visibility moderate
to good, becoming schwa later)
and high-rising/falling terminal becoming cyclonic
quite unlike the monotone English a-oo
(Utsire an island around which herring swim
far, a long-long...)]


evidence of an immortal typist-monkey

unearthed near Stratford where ever ...

ever too high in the widening gyre and gimble
in the Dædalus of thine own inner hast borne
thee too lofted in the Empire inner statehood
whose freudian grillers now will tak thee back ...)

You don't have junk here (hooray!)

—Microsoft SmartScreen is working
to keep it out of your inbox too.


Dear Maria, before arrival in Umbria must we pass through Penumbria?


Ladies and Gentlemen we are floating in space—Spiritualized


Hold back the edges of your gowns, Ladies,
we are going through hell—William Carlos Williams


Please expect a little turbulence, ladies and gentlemen;
there are monsters in our midst—Alice Aforethought 1988

Notes for a Poem about Cursing (revizh 2017)

Sister Sue, tell me baby, what are we gonna do?—Mink Deville

time has gone wrong here for no reason
it keeps swinging me back..........................look it's like thislike you've had a sort of strokelet me explain that there are flowerswhere your hands should bebut what is this called he keeps askingday and night with that look about himyou have a condition which meansyou have to be careful what you thinkhe insisted there was a warning in the sky
but it was just electricity

and don't knowhow to stop[your screensaver is a vision of your own deaththe naked one reaching for you in the leaf mould]..........................that's all it isthe beat goes on & the beat goes onhold the flowers up to your facework them until you see fingersthis might take yearsdip the flowers in hot waxthink them into dripping clustersof language and lighta sort of stroke—you need to think hard nowwhat was it that did the stroking?this computer has not recovered
...........................from a fatal error..
(Published in Intercapillary Space April 09)
Posted by Steve at 6:52 am No comments:

the shrieking of the bats
in the dead, electric
silence of dusk

even when the snow blew into your ears
and both of us hurt a bit, but
I cushioned your little ears
and wrapped them up

having turned itself so profoundly
to you