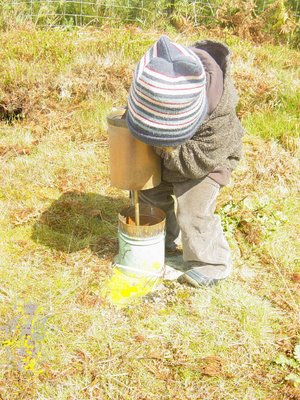 We found this copper funnel in a hole in the ground near the reservoir. We suspected fairies were afoot, and we played with it for a while, saturated in light. Then we hid it again. The light reminded me of something Henry Miller wrote about the Iera Ogos (the Sacred Way) in Athens. He said that beneath the veneer, just under our impressions of modern reality, as you walk the Iera Ogos through the ugly, noisy back streets of Athens, everything is still flooded with light. That's the impression I have of this moment: flooded with light, almost numinous. The pagan priest at the centre of this ritual of light is my son, who was actually looking hard for badgers.
Posted by Steve at 7:20 am